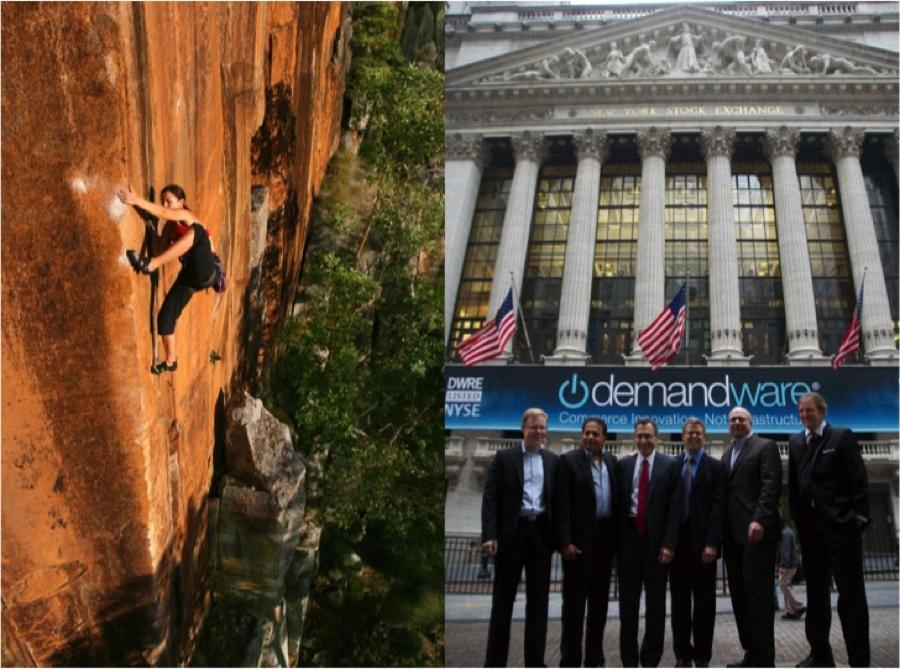 Can Founders Evolve Along with the Needs of their Business?

There is a belief in the business world that founders can’t scale. Put another way, a company’s growth curve will eventually outstrip the capabilities of its founder’s ability to remain CEO. And the statistics seem to bear this theory out: Only 50% of founders remain CEOs after being in business for three years, 40% after four, and a sadly low 25% of founders actually make it through their company’s IPO as CEO.

Why is this? And what makes founders like Mark Zuckerberg or Larry Ellison – CEOs who remained at the helm through their initial public offerings and way beyond – different than the rest?

Adaptability
The answer to this riddle lies at the heart of what being a successful entrepreneur is all about: adaptability. The founders who remain CEOs the longest are the best at evolving and growing with the needs of their business.

Let’s use a graphic to explain what we mean. 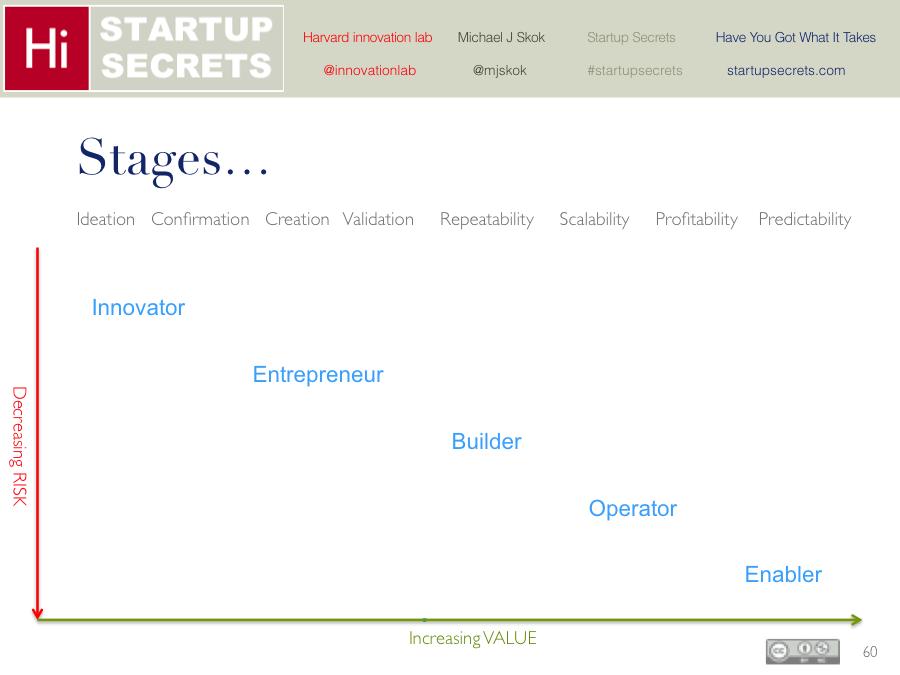 This graphic simply illustrates the classic stages that startup businesses often go through – from ideation all the way through predictability while their value increases over time and with good management risk is reduced. We can then plot the different roles that a CEO plays during those stages. (An obvious disclaimer. This graphic looks neat, organized and linear. In reality it’s much messier, with overlap between many of these stages and skills as well as iteration along the way. In my workshops I’m quick to point that out, and use examples beyond the scope of this article to illustrate that).

Skill Sets of a Founder
The best early-stage founders, for example, are born Innovators who excel at generating ideas and testing them. As product-market fit comes into play the role evolves to being that of an Entrepreneur engaging customers and partners to gain proof. Entrepreneurial skills can apply throughout, though as the company’s business model evolves, and repeatability of revenue and systems becomes a premium, CEOs need to think and act more like Builders. Foundational blocks of distinct value need to shape and support the business for growth. Eventually, as the business creates opportunities to scale, a CEO should begin to adopt the mindset of an Operator. Operators often formalize systems to ensure everyone understands their measures for success and provide predictable access to resources to scale predictably. And finally, as the company begins to truly breakthrough to a point where it is earning stable profits and growth, the best CEOs function as Enablers where their focus is more on empowering their organization to consistently beat expectations – for example as a public company.

This is a very large RANGE of skills that may need to be developed at a rapid pace in high-growth situations. Furthermore, it isn’t as simple as it sounds, because in reality these skills are often needed in combination.

Yet, many of these skills are also at odds. For example: being an Innovator and finding ways to make breakthroughs requires a willingness to break with routine, whereas Operators need to build routine into processes that can be relied upon.

Learning to Scale
So, it can be tough for founders to learn to scale as CEOs and to evolve along with the needs of the position without feeling like they are giving up their very identity. There are many stories of people, like Sandy Lerner the co-founder of Cisco, who appear to have felt threatened by the evolution needed rather than supported through it.

But founders clearly do need to change their role to scale. It’s not realistic to know everyone in the company intimately and have your fingerprints on every decision made. Evolving to a point where you will often feel removed from the day-to-day action at the front lines of the business is hard. All founders have to develop their own unique approach to it, but regardless it’s a tough transition for many innovators and entrepreneurs to make. Yet, in many instances, the role of a founder is supremely important to ongoing value creation. So it should not be looked at as a transition OUT but as a transition UP. And title should be irrelevant. Three good examples from my Harvard iLab class on “Have You Got What It Takes” would be Gail Goodman, and in full disclosure in our portfolio, Stephan Schambach and Jon Hirschtick.

Stephan Schambach is the founder of Demandware, now a multi-billion dollar valued cloud commerce leader that last year alone, handled approximately 150M registered shoppers and processed over 80M orders––covering more than a quarter of a billion items sold and billions more dollars in transactions. Stephan co-founded and built the company from ground up into a leading commerce provider in the retail industry and has steered Demandware with great vision. Today, he continues to add tremendous perspective as an active board member and has a strong executive team managing the business day-to-day and taking the company to the next level.

Jon Hirschtick founded SolidWorks in 1993, with the goal of building 3D CAD software that was easy-to-use, affordable, and available on the Windows desktop. Today, the company has sold billions of dollars worth of CAD/CAM software and continues as part of Dassault Systemes, a company that acquired SolidWorks in 1997. Several years after the acquisition, Jon transitioned out of the CEO role and promoted his long-term partner in building SolidWorks and a great business leader, John McEleney, as CEO after achieving a run rate of $100M in revenue in 2001. In 2011, Jon Hirschtick decided to leave SolidWorks to begin the next phase of his career founding another equally high-potential company, OnShape. Not surprisingly, he brought John McEleney with him as a partner from day one. This is a story of thoughtful partnership that has endured and is repeating success.

And just because it’s tough, doesn’t mean that every founder will fail to scale UP – especially if they are willing to acknowledge the harsh truths about what is actually holding back their personal development. Case in point: under CEO Gail Goodman’s leadership, Constant Contact, which provides online marketing services to small businesses and has grown to some $285 million in annual revenue since it was founded in 1998.

Gail has been at the helm of her company for all of its 15 years and running, which is no small feat. During a recent Startup Secrets session we asked her what her secret was to scaling herself at the rate that her business was growing, she shared this key piece of advice: “You have to face yourself,” she says. “You have to be unbelievably ruthless about what’s working and what’s not working. As CEO, you will have to change hundreds of times to face the different challenges in the different stages your business will go through.”

The rub is that many founders share a common characteristic that is invaluable in a company’s early days: drive. “But being relentless in your perseverance can eventually become an obstacle to change,” says Gail.

Gail, for example, played a key role in product management when Constant Contact was in its early days. She was good at and she was comfortable in that role. Only, as the company grew, she continued to be involved in the day-to-day product decisions. It wasn’t until one of her employees, the head of engineering, took her out to lunch and confronted her with the truth – that she needed to let other people step up – that she realized she had been neglecting other critical areas the company needed her to focus on. “The single biggest investment you can make as CEO is where you spend your time,” she says, “and spending time where I was comfortable was a mistake.”

You can watch the panel discussion with Stephan, Jon and Gail at the Harvard i Lab below:

Our full workshop from Harvard entitled “Have You Got What It Takes?” featuring Demandware, Solidworks / OnShape and Constant Contact can be found here.

The point of these stories is that while it’s rare to see innovators evolve into operators at scale, it is clearly possible to do as Stephan, Gail and of course many other legends such as Bill Gates show us. It means you need to be excited about the challenge of constantly changing and evolving. At the same time, there are plenty of examples of founders who have no interest in running a later stage company and there’s nothing wrong with that either.

For what’s it’s worth as an investor, it really matters to me to see founders stay really engaged building the company, no matter their role or title. However, in the end, there’s no one-size-fits all strategy out there. What matters is what choice YOU, as a founder, want to make over time.

Content from this column was originally published in VentureBeat and Forbes.

In his role at North Bridge Venture Partners, Michael partners with entrepreneurs helping them from inception to company to market leader. As a VC, Michael has backed and built teams that have created billions of dollars of value while focusing on large, market-changing technologies and disruptive business models such as SaaS, Cloud Computing, Open Source and Mobile. Current representative investments include Acquia, Apperian, Cazena, Demandware(NYSE:DWRE), Salsify, RIFTio and Unidesk, as well as Actifio and Revolution Analytics.