Coming 360 from our offices to theirs, from their startup to ours, from investing to returning and reinvesting. 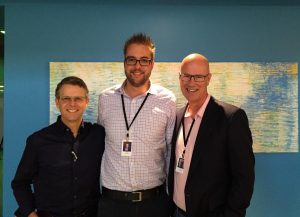 Not long ago, it was my privilege to host Dries Buytaert and Jay Batson as they founded a company — the companywe now know as Acquia. Today we’ve come 360 degrees as my team is working on our investment and not for profit startup out of Acquia’s office space. This full circle is Boston at its best. Creating value, and then reinvesting for the next generation, thanks to the bold minds and generous spirits of founders like these and great executives like Acquia’s CEO Tom Erickson and his team who invited us to co-locate with them. It’s been a fun journey since they started pondering the future of the web and how enterprises would need to unite their communities, content, and commerce.

Acquia is on an exciting journey to build the next great enduring company in Boston. They are already making a big impact by helping diverse organizations like The Weather Channel, Mint.com, LUSH cosmetics and more than 4,000 other organizations to better connect with their audiences and grow their businesses. Demand for its platform, which helps organizations deliver digital experiences at scale with Drupal, is driving Acquia’s growth. The company surpassed $100 million in revenue last year and is among the fastest growing tech companies on the Deloitte Fast 500. It continues to be a pleasure to serve on Acquia’s board.

The excitement at Acquia has been palpable over the last few weeks at Acquia’s new offices in the heart of Boston’s Financial District. The company moved from the suburbs to two full floors at Exchange Place earlier this month, occupying 74,000 square feet in a space that offers state-of-the-art “office-less” space, fantastic views of the Boston Skyline, and numerous creative areas that enrich its passionate, collaborative culture. 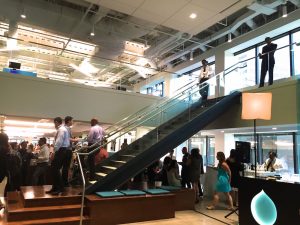 The company gains access to the best talent in Boston’s thriving tech sector, while Acquia’s team and the customers and partners who visit will have all the art, culture and food that Boston has to offer at their fingertips.

It was a wonderful show of 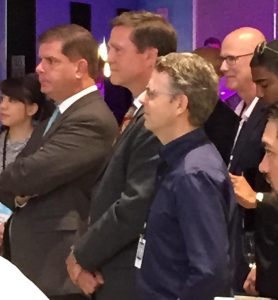 “Boston Strong” as Acquia opened its doors officially with a welcome reception for partners, vendors, friends, employees and leaders from the area’s tech and business community on Thursday. Martin Walsh, mayor of the City of Boston, was an honored guest and welcomed Acquia, adding that its arrival to the downtown area – just a block away from City Hall – was another milestone in the growth of the city’s tech sector.

The Mayor spoke with us about the invigoration Boston is seeing in technology companies moving into the city – a trend we’ve seen in recent years – and the efforts the city is making to ensure the infrastructure, housing, and school systems are not only capable for supporting the influx of great young families from the suburbs, but offers a great alternative with the support and future planning in place to grow.

Acquia, with its growth and innovation, perfectly exemplifies what is great about having headquarters in a technology rich city such as Boston, and we’re so pleased to be part of this as my new team continues to look at our investing and not for profit educational pursuits to help the next generation of entrepreneurs and startups. Congratulations to Boston, the startup community, and Acquia. Here’s to us all continuing to build a regenerative 360 degree culture that Tom, Dries, Jay and others are embodying as they invest, grow and in return re-invest in Boston.